WASHINGTON, April 19 (Yonhap) -- U.S. Secretary of State Rex Tillerson said Wednesday the U.S. is looking into the possibility of adding North Korea back to the list of states sponsors of terrorism as a way to bring pressure on the communist nation.

"We're reviewing all the status of North Korea both in terms of state sponsorship of terrorism as well as all the other ways in which we can bring pressure to bear on the regime in Pyongyang to reengage with us on a different footing than the past talks have been held. So yes, we're evaluating all of those options," Tillerson told reporters.

It was the first time a senior U.S. official has mentioned the possibility of relisting the North as a terrorism sponsor. That underlines the commitment by the administration of President Donald Trump to using all possible means to ratchet up pressure on Pyongyang to move toward denuclearization. 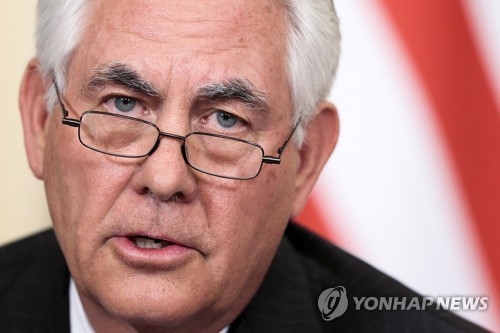 North Korea was put on the list for its 1987 midair bombing of a Korean Airlines flight that killed all 115 people aboard. But the U.S. administration of former President George W. Bush removed Pyongyang from the list in 2008 in exchange for progress in denuclearization talks.

All evidence shows that the North was behind the slaying, though the regime denies any involvement.

Earlier this month, the U.S. House of Representatives overwhelmingly passed bipartisan legislation calling for relisting North Korea as a state sponsor of terrorism.

The North Korea State Sponsor of Terrorism Designation Act (H.R.479), which was introduced by Rep. Ted Poe (R-TX) in January, requires the State Department to submit a report within 90 days after the bill's enactment on whether Pyongyang meets the criteria for a terror sponsor.