The distribution of Galaxy S8 smartphones began earlier in the week ahead of the official release slated for Friday.

On Tuesday, the first day of its preliminary release, Samsung said around 260,000 units of Galaxy S8 and Galaxy S8 Plus smartphones were registered with the country's three mobile carriers.

The figure, however, dropped to around 60,000 units on Wednesday. Preorders for the Galaxy S8 and the Galaxy S8 Plus, which ran from April 7-17, surpassed the 1 million unit mark, setting a new record among all of the company's smartphones so far.

"The registration is being delayed as some of the preorder customers did not receive their top-of-the-line 6GB RAM Galaxy S8 Plus smartphones with 128GB of memory," an official from a local mobile carrier said.

Another industry watcher said Samsung may face hurdles in meeting the 500,000 units of Galaxy S8 smartphones being registered with mobile carriers.

The devices feature high-resolution displays that bend at both edges and come with various innovative technologies, such as iris and face recognition scanners, and a smart voice assistant program named Bixby.

So far, there were no reports of the Galaxy S8 smartphones' batteries catching fire like its ill-fated predecessor the Galaxy Note 7.

Apparently for safety reasons, Samsung refrained from expanding battery capacity, with the Galaxy S8 and Galaxy S8 Plus packing non-removable 3,000 mAh and 3,500 mAh batteries, respectively, that are not overly big in light of big new screens on the devices. It, moreover, claimed the batteries were tested to the highest standards to ensure they were safe to use in the device.

Last year, Samsung had to halt production and recall the Galaxy Note 7 phablet, which came with a 3,500 mAh battery, due to some units catching fire while being recharged. The company later confirmed faulty batteries were at fault for the Note 7's problems. 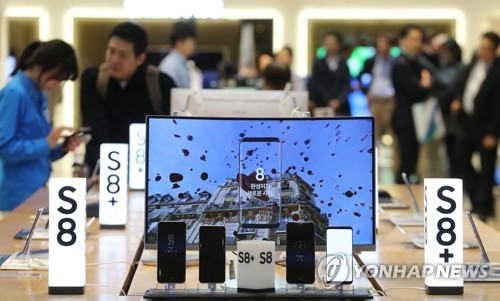