Lotte Mart, a highly successful affiliate of Lotte Group, had to temporarily close 74 of its 99 shops in China in February after local authorities suspended them for violating fire safety regulations. Another 13 have shut down voluntarily.

Officials at Lotte Mart's China business say they have fixed the cited problems and requested re-inspection, but Chinese authorities are not responding. "They only keep saying 'wait,'" a Lotte official said. 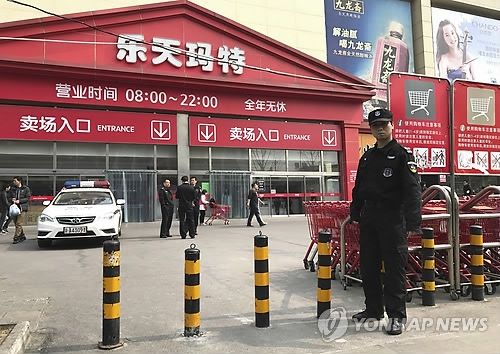 The losses have are more painful because the company has to pay for some 13,000 Chinese employees at Lotte Mart stores, who are being paid their full salaries for the second month in April despite not working.

China's law requires full salary for the first month of business suspension but only 70 percent in the second month. The pay rate falls further with continuation of the suspension.

Lotte Mart, however, is giving full pay to the local workers to send the message that it is not pulling out of China and to maintain its favorable image, business insiders said.

A Chinese employee at Lotte Mart receives about 700,000 won a month, which adds up to 9.1 billion won a month in salary payment.

South Korea-China economic relations had been flourishing with Seoul enjoying increasing exports and tourist inflow, a welcome relief when domestic demand is in a protracted slump. China struck down such ties after South Korea decided to host an advanced U.S. missile defense system, known as THAAD, on its soil. Beijing asserts that the system encroaches on China's security.

More than 70 of Lotte Mart branches have passed their one-month business suspension period, but they have not been given any notifications on future decisions by China, Lotte officials said. Only six have been told that the suspension has been extended for another month, according to the retailer.
(END)

Lotte's losses in China compounded by payment to local workers

Lotte's losses in China compounded by payment to local workers