Pence issued the warning during a joint news conference Monday after his meeting with South Korean Acting President Hwang Kyo-ahn amid growing tensions over the North's nuclear and missile programs.

The North's propaganda outlet Uriminzokkiri slammed Pence for what it called babbling about sanctions and pressure.

"Hwang and Pence plot to strengthen sanctions and pressure against us," it said. "The move is a delusion aiming to stifle us."

It is the first reaction by North Korea though Uriminzokkiri is not its state media.

Pence's visit to Seoul came amid speculation that Pyongyang could conduct a nuclear test or launch a long-range rocket around key anniversaries in April.

The country will mark the 85th anniversary of the creation of the Korean People's Army next Tuesday, an occasion for a possible provocation.

Tensions on the Korean Peninsula were heightened amid concerns over Washington's possible pre-emptive strike against North Korea. Pyongyang said it is ready for a war if the U.S. takes military action.

North Korea is seen as toning down its condemnation as its foreign ministry has yet to release its stance on Pence's warning, analysts said.

In response to a similar warning made by U.S. Secretary of State Rex Tillerson on March 17, North Korea's foreign ministry said the country is ready to counter any aggression by the U.S.

Washington's top diplomat said during his visit to Seoul that all options including military action are on the table to counter North Korea's threats.

The latest tensions have unintentionally benefited North Korea as consensus was growing that military action against the North is too risky, according to an analyst at South Korea's state-run think tank.

"Pyongyang seems to have conviction that the U.S. will not stage a pre-emptive attack against its nuclear facilities if Washington does not decide to push ahead with an all-out war," Kim In-tae, an analyst at the Institute for National Security Strategy, said in a report.

He said that North Korea's tension with the U.S. highlighted the risk of Washington's military action on the peninsula as Syria and the North are different. 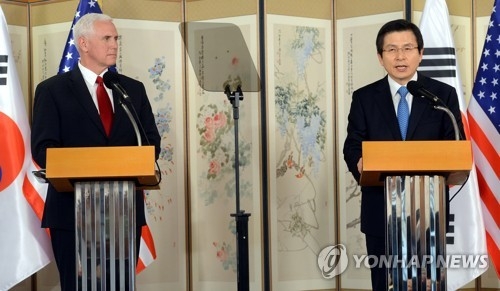