SEOUL, April 20 (Yonhap) -- A private think tank Thursday called on the early passage of a bill through the National Assembly for the establishment of the energy "prosumer" market to allow anyone to produce and sell electricity.

Parliament has yet to pass the bill introduced by the Ministry of Trade, Industry and Energy last June to open the energy prosumer market that would allow people to freely sell the power that they have produced and saved through renewable equipment, energy storage systems and electric vehicles.

"We need to restructure the power industry to foster the use of the energy storage system (ESS) by households and small businesses," the Korea Economic Research Institute (KERI) said in a report.

About 41 percent of German households that produce solar energy have energy storage systems for the sale of the solar energy they produced as of 2015, the report said.

"It is almost impossible for private businesses to enter the energy market in South Korea as the country's energy market is virtually monopolized by the state-run Korea Electric Power Corp.," the report said.

The ministry has said the bill, if enacted, would encourage local power operators to save energy in large-scale batteries and distribute the power to create a combined 440 billion won (US$384 million) worth of new demand for ESS by 2020.

The government aims to reduce fossil fuel energy and expand green energy resources by pouring more than 40 trillion won into the sector in the coming five years.

It will shut down 10 superannuated coal-powered plants nationwide, with the renewable power supply target, or the percentage of green energy sources, set at 6 percent by 2020. 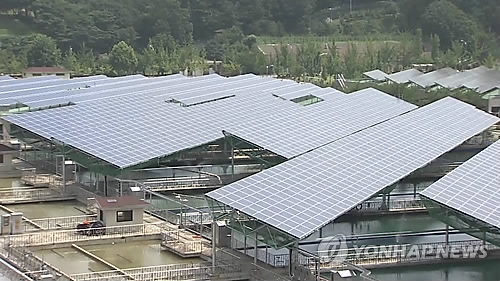