SEOUL, April 20 (Yonhap) -- LG Electronics Inc. said Thursday it plans to release the G6 smartphone in 24 European countries starting next week, in line with steps to expand its global sales.

Starting next week, South Korea's No. 2 tech giant will start sales of its flagship device in major European countries, including Britain, Germany, France and Italy.

LG Electronics kicked off sales of the G6 in the North American market earlier this month.

The company said it also plans to release the device in major Asian, Latin American and African nations throughout next month.

Featuring a 5.7-inch screen and dual 13 mega-pixel rear-facing cameras, LG said the smartphone has been enjoying rising popularity on the back of what it calls "Full-Vision" display that comes with an 18:9 screen aspect ratio. 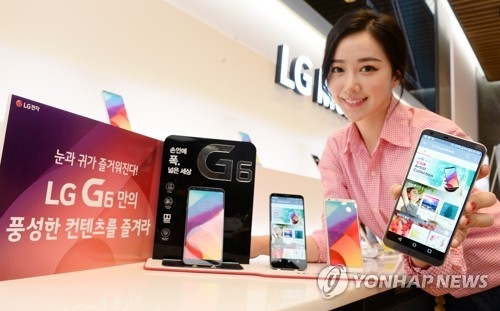 LG Electronics to release G6 in Europe next week

LG Electronics to release G6 in Europe next week