SEOUL, April 20 (Yonhap) -- Prices of eggs are on the rise again recently as imports of chickens were halted from the United States and Spain due to outbreaks of bird flu there, industry sources said Thursday.

Prices of chickens and eggs surged to the highest level in recent months in three decades as more than 33 million chickens were culled following the nationwide outbreak of avian influenza late last year.

The prices had fallen briefly with the import of chickens and eggs from the U.S. and Spain, but began moving up again. The retail price for a carton of 30 eggs rose to 7,696 won (US$6.7) as of Wednesday, up from 7,311 won a month earlier and 5,350 won from a year earlier, according to the Korea Agro-Fisheries & Food Trade Corp.

"Avian influenza has subsided recently but the outbreak of bird flu in the United States and Spain has made it difficult for us to import chickens," an official of the Ministry of Agriculture, Food and Rural Affairs said. "Eggs are currently in short supply and it will take considerable time for egg prices to stabilize."

It will take at least half a year, an industry source said, noting the time it takes for chicken farms to hatch eggs and raise the chickens for egg production.

About half of the country's 1,500 chicken farms have not yet secured chicks to raise as they were banned from doing so by quarantine authorities over concerns of bird flu spreading again. 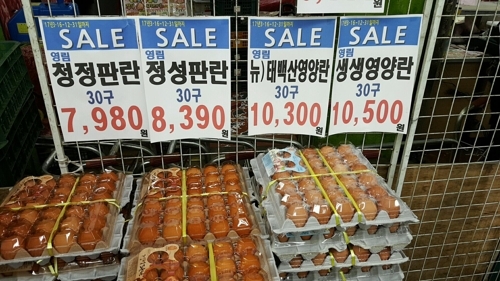