The candidate of the Liberty Korea Party said that if elected in the May 9 poll, he would push to spend 50 trillion won (US$43.7 billion) on the five-year plan to overhaul old public infrastructure assets, including tunnels, ports, roads, subways, railways, gas pipes, water supply and sewage systems.

For what he calls "Korea's New Deal," Hong said he will establish a government panel to look into the condition of public infrastructure across the country.

"Now, the Republic of Korea's infrastructure is at risk of large-scale accidents. It is the time for us to replace dilapidated public infrastructure," the prosecutor-turned-politician said. 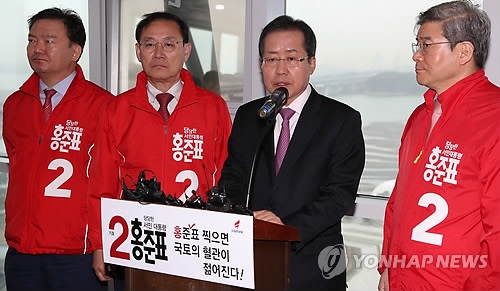 "We consider public safety as the No. 1 priority in this project to improve public infrastructure, and at the same time, we will seek to revitalize the economy and create jobs," he added.

Hong also said that his plan involves capitalizing on the country's information and communications technologies to ensure new infrastructure assets will be "smart" ones that can help prevent future accidents and allay public safety concerns.

"I believe our experience (in establishing smart infrastructure) will provide an opportunity to export it and create new sources of business profits," Hong said.

In recent voter surveys, Hong has ranked a distant third with his support ratings in woeful single digits. The competition for the upcoming election is seen as a duel between front-runner Moon Jae-in of the liberal Democratic Party and Ahn Cheol-soo of the center-left People's Party.

Later in the day, Hong unveiled his plan to better support the country's military draftees, retired soldiers and war veterans.

He pledged to raise the level of the top government official in charge of veterans' affairs to a minister from the current vice minister, and increase monthly financial benefits for war veterans.

He also pledged to build an additional national cemetery for those who have contributed to national defense, increase monthly wages for draftees and enhance the quality of medical services for them.

His pledges also include extending the retirement age for professional soldiers and seeking to revive an incentive system that gives extra scores in recruitment exams to those who have completed their military service of at least 21 months.

The incentive system for those applying to land jobs at government agencies or public corporations was abolished in 1999 after the Constitutional Court ruled that it infringed on the rights of women and disabled people. 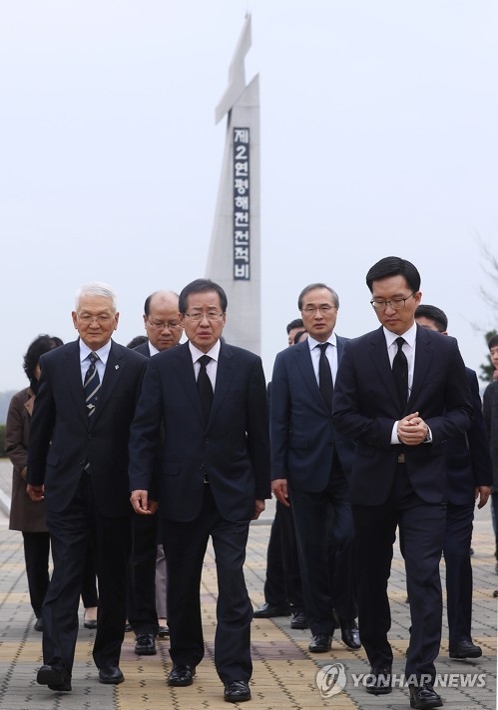