His remarks came amid growing concerns that the communist regime could conduct its sixth nuclear test or an intercontinental ballistic missile launch to mark the 85th anniversary of its army's creation next Tuesday.

"I call on the military to keep close tabs on the possibility of North Korea's provocations and strengthen its (readiness) posture for an immediate response," he said during a regular meeting of Cabinet ministers on pending state affairs. 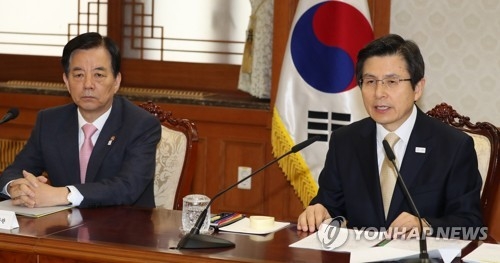 Pointing to Pyongyang's failed missile launch on Sunday and its menacing rhetoric, the acting president said that the reclusive state could engage in provocative acts again "at any time."

Tensions have been rising on the peninsula in recent weeks with the North seen preparing for a new nuclear test and the United States issuing a strong warning against its provocative behavior.

On April 7, the U.S. struck a Syrian air base to punish the Bashar al-Assad regime for a suspected chemical attack. Less than a week later, it dropped a massive bomb on an Islamic State complex in Afghanistan. Observers said these military steps sent an implicit message to the North.