Moon Jae-in, the presidential candidate of the liberal Democratic Party, noted that government spending for people with physical and mental disabilities accounted for only 0.61 percent of the country's gross domestic product (GDP) in 2013, far lower than the OECD average of 2.1 percent that same year.

"I will gradually expand the government budget for people with disabilities each year to prepare for a rise in spending," said Moon. The liberal presidential hopeful currently enjoys a lead over all other contenders in the May 9 election. 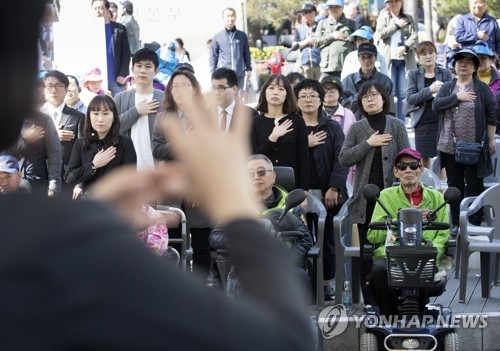 "I will increase government spending to create a barrier-free environment for people with disabilities," Moon was quoted as saying by his election camp.

The presidential front-runner did not elaborate on how much government spending will increase under his administration.

Yoo Seong-min of the splinter conservative Bareun Party, on the other hand, was more specific, vowing to boost government spending to 1.5 percent of the country's GDP, and eventually to 2.2 percent, which he said was the OECD average now.

The conservative candidate also promised more jobs and better working conditions for the disabled, noting they are currently not even protected under the law that guarantees minimum wage.

He said he will work to expand the job quota for people with disabilities at each workplace to 5 percent.