SEOUL, April 20 (Yonhap) -- Mystery persists over U.S. President Donald Trump's dispatch of an "armada" toward the Korean Peninsula, leaving many people here puzzled and concerned about defense coordination between the allies.

Early this month, the U.S. Pacific Command announced the departure of the aircraft carrier USS Carl Vinson and its strike group from Singapore for waters near the peninsula.

On April 12, Trump said in an interview with Fox News, "We are sending an armada (to the area). Very powerful."

A day later, a U.S. Pacific Fleet official told Yonhap News Agency in an email that "USS Carl Vinson and escorts continue to transit the Western Pacific. I cannot comment on future operations." 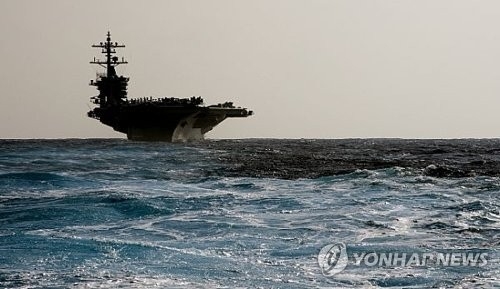 News of the Nimitz-class flattop's imminent deployment around Korea added fuel to military tensions on the divided peninsula.

But it was belatedly found out that the carrier was thousands miles away from Korea last weekend, when North Korea staged a massive military parade in a show of force.

The U.S. warships reportedly held joint drills with the Australian Navy in waters close to Indonesia after sailing in the opposition direction from Korea.

Responding to the revelations by a news report, the White House denied having lied or misled the public. Its press secretary Sean Spicer stressed that the Carl Vinson and accompanying ships are anyway heading toward Korea after a stopover.

"It is happening," he said at a press briefing.

The Hankyoreh newspaper in Seoul pointed out that it's unclear whether it was part of the Trump administration's smoke-screen tactic aimed at putting pressure on Pyongyang ahead of the April 15 key political event or just a communication slip.

"If it was a premeditated lie, it's an act of undermining the credibility of the whole U.S. diplomatic policy, not just on the Korean Peninsula issue," it said in an editorial. "Not just that. It's a breach of etiquette against the alliance."

Even if the episode stemmed from a communication error, it could increase jitters about the new U.S. government's handling of state affairs amid the grim security conditions, added the daily.

Another question is whether South Korean defense authorities kept track of the issue.

High-profile U.S. strategic assets' operation in or around Korea is a highly sensitive topic.

Repeatedly asked about the Carl Vinson, the Ministry of National Defense maintained that the allies are in close cooperation on such a matter.

"South Korea and the U.S. consult on the deployment (of such strategic assets) in waters around the Korean Peninsula and share information," the ministry's spokesman Moon Sang-gyun told reporters on Thursday. He refused to elaborate.

A defense source said the Carl Vinson strike group is expected here by the end of this month and may hold another combined exercise with South Korea in the East Sea. 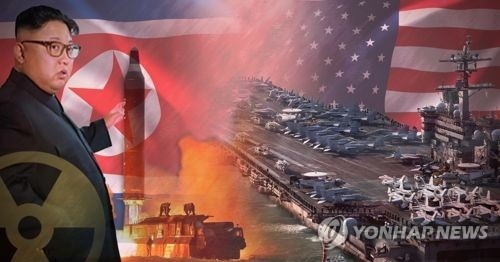 Experts in Seoul, however, cautioned media against reading too much into the saga.

"The core of the Trump administration's policy on North Korea is 'pressure diplomacy,'" said Chung Sung-yoon, a researcher at the Korea Institute for National Unification. "Accordingly, it's coping actively with the security condition of the Korean Peninsula,"

There seems to be no change in its strategic purpose despite confusion about the timing of the aircraft carrier's arrival or subtle differences in some public comments by U.S. officials, he added.

Chang Yong-seok, a senior researcher at Seoul National University's Institute for Peace and Unification Studies, agreed that it's premature to conclude that the Trump administration is suffering a significant setback over its diplomatic and defense policy, with the line-up of working-level officials on Korea still in the making.

"There are various measures and wordings released (by the U.S.) within the big framework of urging and pressuring North Korea to exercise restraint in cooperation with China," he said.