Previously creating a buzz with the news of her jaw-dropping collaboration with superstar G-Dragon for the album's lead single of the same name, the roughly 50-second video slightly sets the tone for the whole project and keeps revving it up for her fans who welcome her return.

Infused with retro vibes throughout alongside the hypnotizing sound of electronic piano lines, the teaser marks an indication of the conceptual ideas on which the album is built, culminating in a goosebump-inducing whisper by IU.

While hosts of group acts almost predominated the realm of K-pop, albeit still true, IU, as a teenage solo artist, successfully made her presence felt with earlier tracks such as "Boo" and "Marshmallow," both released in 2009, proving her potential as a budding star.

The following year, her magnum opus to date "Good Day," hugely promoted by the word "triple octave-leaping," redefined the parameters of her full-on vocal ability and swiftly climbed atop most charts. It became one of the biggest hits that year as well as a career milestone for the young artist on the cusp of evolving into another K-pop diva whose influence cuts across genders and generations.

As if her lexicon had no place for such a word as "slump," the whole K-pop world literally stopped with the release of the 2014 EP "A Flower Bookmark," consisting of IU's covers of seven oldies that got listeners nose-deep in nostalgia for the 80s and 90s. Critics gave enthusiastic accolades to the old-soul's emotional richness delivered in introspective songs such as "My Old Story" and "The Meaning of You."

Though her new project has been on ice for a while due to her acting pursuits, it shows good cause for her fans' anticipation of more than just GD's feature on "Palette," which keeps her foot on the gas with ten tracks including those where she is credited for lyrics and composition.

The release date of "Palette," her first studio effort since 2013's "Modern Times," is set for Friday. 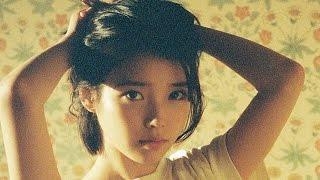