Park, an honorary ambassador for the 2017 U-20 World Cup, said he hopes the young Taeguk Warriors can repeat the success of the senior national team at the 2002 FIFA World Cup. Park was a member of that 2002 squad that reached the semifinals.

"Since the U-20 World Cup will be played out at home, I support the national U-20 team players to create another miracle so that South Korea again feel the passion and the energy that it had during the 2002 World Cup," Park said through the local organizing committee for the U-20 World Cup. 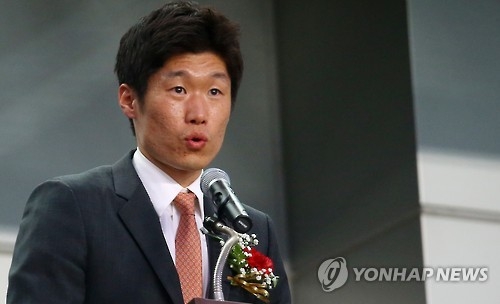 Park, who is the first Asian to claim the UEFA Champions League and the FIFA Club World Cup titles with Manchester United, never played at the U-20 World Cup in his career. The former midfielder, who retired in 2014, played at three different World Cups and Summer Olympic Games, but not once at the youth event.

"Personally, I had a huge turning point as a footballer through the Olympics and the World Cup, but I've never experienced the U-20 World Cup," he said. "Because of my studies, I will not be able to cheer on the national team in person, but I will pray for South Korea's good performance."

Park, who also had stints with PSV Eindhoven and Queens Park Rangers, is currently in Neuchatel, Switzerland, studying in the FIFA Master Course, a sports management program coordinated by the International Centre for Sports Studies and endorsed by the FIFA.

Park said the players at the U-20 World Cup will have great opportunities to become better footballers.