SEOUL, April 20 (Yonhap) -- A court found comedian Lee Chang-myung Thursday not guilty of leaving the scene of an accident after driving drunk last year, but fined him 5 million won (about US$4,390) for violating laws on road traffic and car accident compensation security.

The Seoul Southern District Court acquitted Lee of the drunk driving charge because "it has not been verified."

Investigators said that the 46-year-old comedian hit a traffic light with his Porsche at an intersection in Seoul's Yeongdeungpo Ward around 11:20 p.m. on April 20 last year. He then left the scene before police arrived, they said.

Prior to the accident, Lee and six acquaintances had reportedly consumed six bottles of Chinese liquor, six bottles of Korean liquor and nine 500-milliliter glasses of draft beer at a restaurant over four hours, starting at 6:30 p.m. the day of the accident.

The comedian appeared at the police station nine hours after the accident and denied he had been drunk or intentionally ran from the scene, saying he only left to go to a hospital due to pain.

A blood alcohol concentration test conducted by the police failed to determine whether he had been drunk at the time of the accident. However, police calculated his blood alcohol content (BAC) level using the Widmark formula, an investigative tool to find the BAC for a given person based on a specific amount of alcohol consumed. 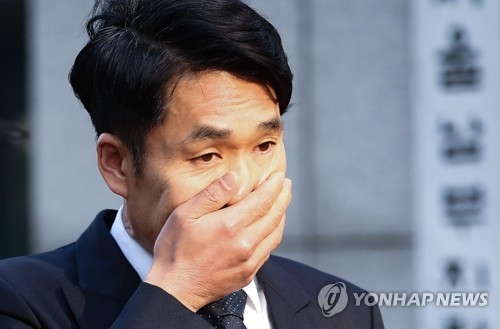 Prosecutors indicted Lee for allegedly drunk driving after judging his blood alcohol content at more than 0.05 percent, a level that calls for his driver's license to be revoked.

In Thursday's ruling, judge Kim Byung-chul discounted the amount of Lee's alcohol consumption based on the Widmark formula, reaching the judgment that his drunk driving was verified.

"The speed and amount people drink can vary. But this case of the drunk driving charge was brought against him under the premise that Lee and all of his acquaintances had drank the same amount of alcohol," Kim said. "With this kind of vague estimate, his criminal charge cannot be recognized."

But Lee was found guilty of failing to report the accident to police, since the injury he sustained was not serious enough to prevent him from calling the police given that he walked to a hospital after the accident and the process of his treatment there, the judge said.

Lee, a widely known comedian who has hosted KBS TV's "Let's Go! Dream Team Season 2" for many years, told reporters after the court ruling that he had a grueling year and hoped everybody believes he did not commit drunk driving. He also offered the program's staff an apology over its abolishment due to his trial.