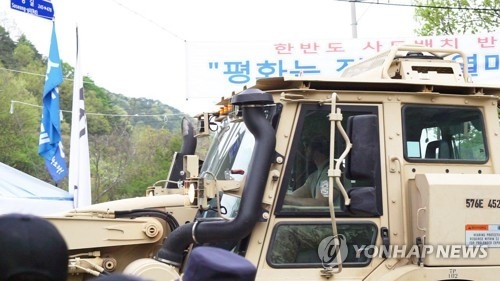 Since the official announcement of a decision to install a THAAD battery in South Korea, Seoul and Washington have been negotiating the use of a golf course in the southeastern county of Seongju for the deployment led by the United States Forces Korea (USFK).

"After the process on the THAAD land provision began March 2 under the Status of Forces Agreement (SOFA), the South Korean Ministry of National Defense and the USFK filed for a permission from the joint (South Korea-U.S.) SOFA committee for the land transfer," the ministry said in a brief press release.

"The chief of the joint committee approved it on Thursday, wrapping up the SOFA process," it said.

The SOFA is part of the South Korea-U.S. defense treaty, which governs the status of U.S. forces stationed here and the latest action will allow the USFK to expedite the THAAD deployment.