Minju Joson, the mouthpiece of North Korea's cabinet, said Japan's actions will not cover up the "hideous unethical crimes" it committed during the war, according to the North's Korean Central News Agency (KCNA).

"Japan's action related to the girl statue for peace reminds one of mere child's playing to get the sun eclipsed by palms," KCNA said in an English dispatch on the commentary. 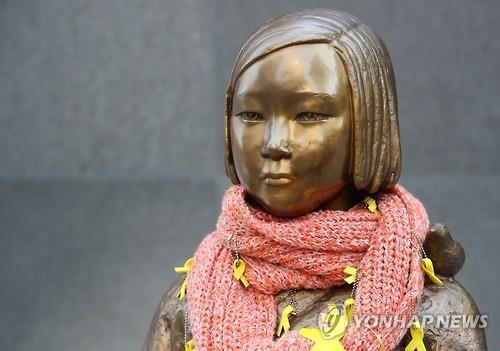 Historians estimate that up to 200,000 women, mostly from Korea, were forced to work in front-line brothels for Japanese soldiers. Korea was a colony of Japan from 1910-45.

The girl statues have been erected in various cities around the world, including in front of the Japanese Embassy in Seoul, to honor the victims of the atrocity. They have become a source of diplomatic friction between Seoul and Tokyo, leading Japan to recall its ambassador to South Korea early this year.

"If Japan aspires after political power, it should not evade the demand of the international community but keep pace with international trend for justice and peace," KCNA quoted the commentary as saying.

"Under the present situation that girl statues for peace are erecting in all parts of the world, it is necessary for Japan to come to itself," it said, according to KCNA. "Japan's ambition to become political power while evading the past liquidation is no more than foolish act to become gentlemen before having a bath."