SEOUL, April 20 (Yonhap) -- Chung Yoo-ra, the daughter of impeached South Korean President Park Geun-hye's friend at the center of a bribery scandal, has been banned for life from equestrian competitions following her irregularities, an official from the sport's national governing body said Thursday.

An official at the Korea Equestrian Federation (KEF) said that its discipline committee had a meeting on Monday and decided to permanently ban Chung, the daughter of Choi Soon-sil, which prevents her from competing in any equestrian events either domestic or international.

Chung, formerly known as Chung Yoo-yeon, is a former member of the South Korean national equestrian team. She won the gold medal in the team dressage equestrian event at the Incheon Asian Games in 2014.

Chung has been accused of receiving undue favors in admissions and academic affairs at Ewha Womans University in Seoul thanks to her mother's influence. The KEF code says those who commit wrongdoings in college admissions are permanently barred from the sport.

The audit from the Korea Sport & Olympic Committee and the Ministry of Culture Sports and Tourism last year found that Chung also received undue favors from the KEF based on her mother's ties with Park. Choi is currently standing trial on charges of meddling in state affairs and amassing profits using her connection to the former president.

The audit showed that the KEF doctored documents for Chung in the past and the 20-year-old equestrian rider took advantage of it. In 2015, she received a national team training allowance even though she didn't appear at training. The KEF discipline committee ordered that Chung should pay back the money that she earned from faking training.

Chung is currently in Aalborg, Denmark, after being arrested by local authorities in January. A Danish court on Wednesday upheld prosecutors' decision to extradite her, but it remains uncertain whether or when Chung will be deported to Seoul, as she appealed to a higher court. 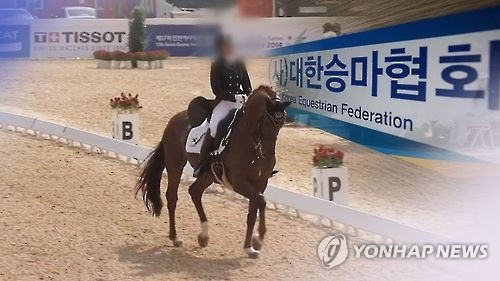