The launch ended in failure as the missile blew up right after takeoff.

The press statement was issued by U.S. Ambassador Nikki Haley, who holds this month's rotating presidency.

It was the fifth time this year that the council has adopted a press statement on North Korea.

Since the North's first nuclear test in 2006, the council has adopted six resolutions, all banning Pyongyang from any ballistic missile activity over concern the technology could be used in making nuclear missiles.

"The members of the Security Council demanded that the Democratic People's Republic of Korea shall immediately cease further actions in violation of the relevant Security Council resolutions and comply fully with its obligations under these resolutions," the statement said.

The council also warned the North of "further significant measures, including sanctions."

"The members of the Security Council stressed that the Democratic People's Republic of Korea's illegal ballistic-missile activities are contributing to its development of nuclear-weapons delivery systems and are greatly increasing tension in the region and beyond," the statement said. 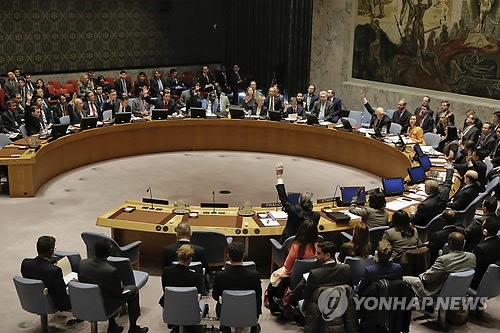 The council expressed its strong determination to deal more proactively with North Korea's provocations by stating that their further signification measures include sanctions, the ministry said in a press release on Friday (Korean time).

"The government appreciates the fact that all the UNSC member countries including China and Russia got together and issued the resolute condemnation of the North Korean provocation," according to the ministry.
(END)