"Today, I'm directing the Department of Commerce to immediately prioritize the investigation ... into foreign steel arriving into our markets, and to submit a report on the effects of these foreign steel products on the national security of the United States," Trump said during a ceremony to sign a memorandum ordering the investigation.

"It's not just the pricing, it's not just employment, it also has to do with the national security of our country, which people never talk about. I talked about it. Maintaining the production of American steel is extremely important to our national security and our defense industrial base," he said.

To initiate the investigation, the Trump administration invoked Section 232 of the Trade Expansion Act, a rarely used tool that allows emergency trade sanctions on "national security" grounds. The move was widely seen as a precursor to fresh trade barriers to foreign steel imports.

The commerce secretary has 270 days to complete the investigation, but Trump said it can be done in 50 days.

Asked if the measure will affect his efforts to enlist Chinese help in dealing with North Korea, Trump said, "This has nothing to do with China. This has to do with worldwide, what's happening. The dumping problem is a worldwide problem." 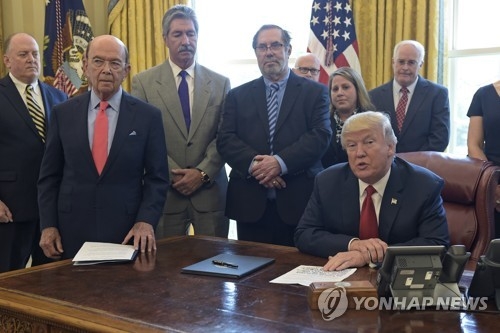