The K League Classic club said they decided to terminate the contract with Lee following the player's request. Lee joined Suwon from Al Sadd in 2016 after signing a two-year deal.

"Head coach Seo Jung-won, our coaching staff and management officials met with Lee many times to persuade him," Suwon said in a statement. "But the player stood firm on his decision, so we had to accept his retirement."

Lee reportedly felt a sense of shame over Suwon's poor performance this season. Suwon, four-time K League champions, are currently winless in the 12-team league. They are sitting in 10th place with five draws and one loss.

Suwon were held to a scoreless draw by Gwangju FC at home on Sunday, and some angry supporters lashed out at their own players and even threw beer cans onto the pitch. Lee didn't play against Gwangju, but he was apparently disappointed by the club supporters' actions toward the players.

After the match, Lee told local media he will quit football, which stunned Suwon coaching staff and fans. The club management had a meeting with Lee on Tuesday and Thursday as well as early Friday, asking the footballer to change his mind, but they failed to persuade him.

Lee wrote an apologetic message to the fans on the club's Facebook page. The defender, however, emphasized that his decision is not based on the incident with the supporters over the weekend.

"I've always thought about retirement since I returned to Suwon last year," he said. "I wanted to help the club, but I felt guilty that I couldn't do much in a difficult situation. I also felt pressure for blocking the path of the club's young players."

Lee said he decided to leave the club before it was too late.

"Some people might think I'm a coward for making this decision when the team is caught in a difficult moment," he said. "But I thought this team could make progress with my departure. I'll always have good memories with Suwon and will support the club wherever I am."

The 37-year-old center back made his professional debut in 2002 with Anyang LG Cheetahs (now FC Seoul) and moved to Incheon United two years later. He first joined Suwon in 2006 and won the league title in 2008.

Lee then spent two years in Japan playing for Kyoto Sanga and the Kashima Antlers. He signed with Al Sadd in 2010 and claimed the Asian Football Confederation Champions League title with the Qatari club in 2011 before returning to Suwon last year. He has nine goals in 168 K League appearances.

For South Korea, Lee won 54 caps and scored five goals. He is best known for his performance at the 2010 FIFA World Cup in South Africa, where he scored two goals and helped South Korea reach the round of 16. He last appeared for the Taeguk Warriors in 2013 in a friendly match against Croatia. 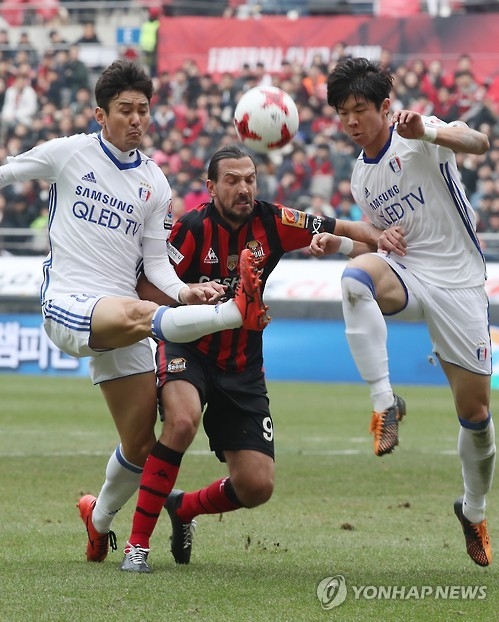