SEOUL, April 21 (Yonhap) -- The first court hearing on a corruption case involving former President Park Geun-hye will be held early next month. according to sources Friday.

The sources said that the Seoul Central District Court plans to hold the preparatory session on May 2, one week before the presidential election.

Park's legal representatives and prosecutors will explain their opinions in court on a string of her charges, including bribery, abuse of power, coercion and leaking government secrets.

On Monday, the prosecution indicted the jailed former president as they wrapped up a six-month probe into the massive scandal that led to the Constitutional Court's unprecedented ruling last month to oust an incumbent leader.

In the indictment, the prosecutors accused Park of taking and soliciting bribes worth 59.2 billion won (US$52 million) from three conglomerates -- Samsung, Lotte and SK -- for herself and her friend Choi Soon-sil.

If convicted, she could face a prison term ranging from 10 years to life.

It remains uncertain whether Park will attend the court hearing given that it is not mandatory for a defendant to join the preparatory session.

Meanwhile, Park's aide told Yonhap News Agency that she has sold her private home in Samseong-dong, southern Seoul, and bought a new house in Naegok-dong, a quieter neighborhood close to her old house.

Some residents lodged complaints about her supporters staging raucous rallies in front of her residence in the densely populated neighborhood. 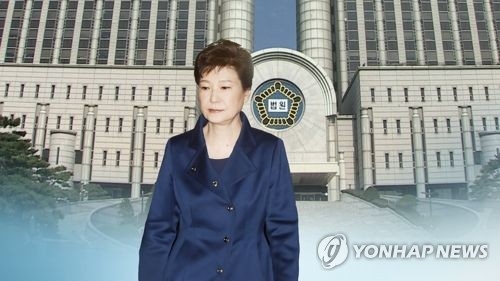 First court hearing on Park to be held on May 2: sources

First court hearing on Park to be held on May 2: sources