SEOUL, April 21 (Yonhap) -- A former top diplomat of South Korea has disclosed a document that backs up his claim that the South consulted North Korea before a key U.N. vote in 2007, adding fuel to controversy surrounding presidential front-runner Moon Jae-in, who served then as a chief presidential aide.

In October, Song Min-soon published a memoir in which he said that Seoul abstained from the 2007 U.N. resolution on North Korea's human rights after consulting Pyongyang.

Song, who served as the foreign minister from 2006 to 2008 under the liberal Roh government, argued that the book is factual, but Moon Jae-in, who served as chief of staff to then-President Roh, has claimed it is not true. Moon is currently the front-runner in the upcoming May 9 presidential election.

In an interview with the JoongAng Ilbo daily newspaper published Friday, Song disclosed the document he alleged was made by the then presidential office based on secret communication with the North.

The document included what appears to be the North's opposition to a move in the South to vote for the U.N. resolution, saying that it cannot be "justified under any circumstances" and runs counter to what the then leaders of the two Koreas agreed after holding a summit.

It went on to say that the South is urged to take a "responsible" stance on the resolution issue if it wants to advance its relations with the North, adding that it will "closely" watch how the South acts.

At bottom was a handwritten memo that hinted that the document was delivered from the then spy agency chief to the then national security adviser.

The disclosure is expected to create a political controversy in South Korea ahead of the presidential election as it took issue with Moon who has denied it.

The former foreign minister said in the interview that Moon has made himself a liar by strongly denying what he claimed in the memoir and that he had no choice but to make public the document to prove himself right. 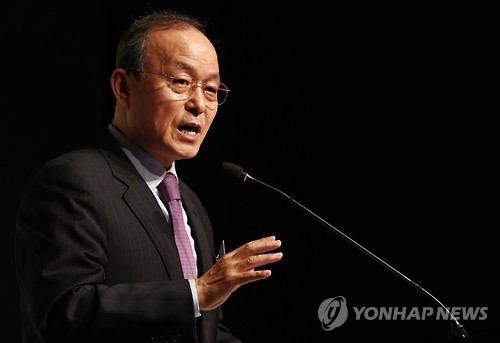