SEOUL, April 21 (Yonhap) -- A former top diplomat on Friday disclosed a document to back up his claim that Seoul officials consulted North Korea before a key U.N. vote in 2007. It added fuel to a political fire that has engulfed presidential front-runner Moon Jae-in, who was then a chief presidential aide.

In October, Song Min-soon published a memoir in which he said that South Korea abstained in a vote for the 2007 U.N. resolution on North Korea's human rights violations after discussing the issue with Pyongyang officials.

Song served as the foreign minister from 2006 to 2008 in the liberal Roh Moo-hyun government.

Moon, who was the presidential chief of staff and involved in the decision, has claimed Song's allegation is not true.

In an interview with the JoongAng Ilbo daily, Song disclosed the document he alleged was made by the then-presidential office based on secret communications with the North.

The document included what appears to be the North's opposition to the South voting for the U.N. resolution. It showed that the North said the vote cannot be "justified under any circumstances" and runs counter to the summit agreement between the then-leaders of the two Koreas.

It went on to urge the South to take a "responsible" stance on the resolution issue if it wants to advance its relations with the North.

At the bottom was a handwritten memo that hinted that the document was delivered from the then-spy agency chief to the then-national security adviser.

The disclosure came two days after a conservative candidate revisited the controversy during a TV debate. Moon denied it again.

The former foreign minister said in the interview that Moon's continued denial has made him a liar and that he had no choice but to make public the document to prove himself right.

"Where he continues to say so (as he claimed before) even after seeing the document, it is time for Moon to provide an answer now," Song said, entering his office in central Seoul.

Moon has yet to respond to the matter, but a spokesman of his campaign team said that it was then-President Roh who decided to abstain from the 2007 resolution vote. Seoul notified the North of the decision after, not before, it was made.

Moon's rivals ramped up pressure on him to provide clarification on the issue. Presidential candidate Hong Joon-pyo of the conservative Liberty Korea Party claimed in a forum that Moon was found to have lied about the matter, citing the document disclosed by the former foreign minister.

Meanwhile, Moon's campaign said it plans to file a complaint against Song for defamation and violations of laws on the election and the management of presidential records.

"On the abstention, Song is suspected of spreading false information in a bid to prevent Moon from being elected, which we think constitutes a violation of election law," Park Kwang-on, Moon's publicity chief, told reporters.

He also said that Song may have leaked presidential records to the media if the disclosed document was produced by the presidential office. 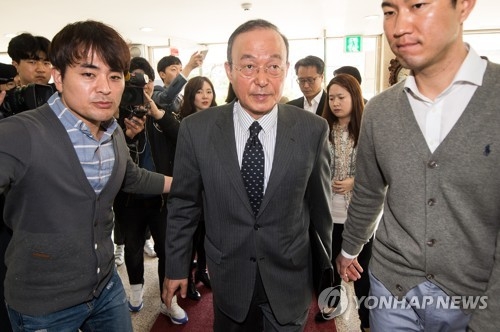