SEOUL, April 21 (Yonhap) -- South Korea has participated in a multilateral naval exercise involving U.S., Japanese and British forces to crack down on Somali pirates around the Gulf of Aden, the military here said Friday.

The exercise was focused on vessel search and inspection, naval helicopter operations and maneuvers required in anti-piracy military operations.

Japanese Rear Adm. Tatsuya Fukuda was in charge of the command and control of the four-nation exercise. The rear admiral is currently the commander of the Combined Task Force-151, a multinational naval task force commissioned to disrupt piracy and armed robbery in the region.

"The latest joint exercise helped build up trust among the navies of the four countries and beef up their joint operability," said South Korean Navy Capt. Kim Kyung-ryul, commander of the Cheonghae Unit which South Korea has stationed in the Arabian Sea area since 2009.

"It was an opportunity for the Cheonghae Unit to increase its contribution to international efforts to eradicate pirates in the seas near Somalia," he said.

From Feb. 27 to March 4, the Somalia-based South Korean vessel and forces have also participated in a similar anti-piracy exercise led by European Union forces in the area. 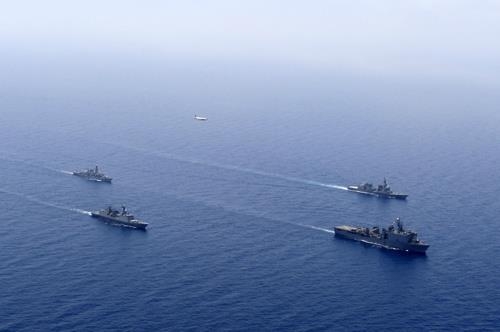