The candidate of the Liberty Korea Party has been struggling to boost his anemic campaign in the race dominated by liberal candidates Moon Jae-in and Ahn Cheol-soo.

During a meeting with business leaders, the tough-talking former prosecutor claimed that North Korea sympathizers who are "disguised as progressives" have been ruining the nation's civic consciousness, and that they are part of "accumulated evils."

"Should the government be taken up by the progressive, leftist group as we are undergoing the impeachment case (involving former President Park Geun-hye), our economic policy as well as security will face problems," Hong said during a meeting with local exporters. 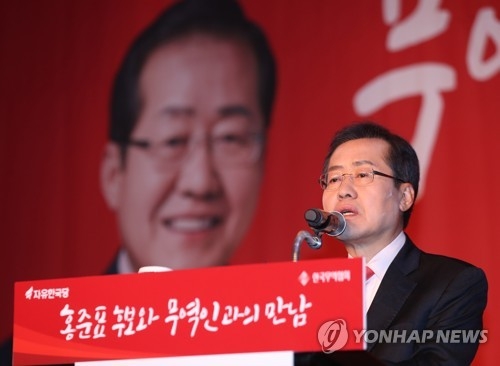 His invective came as his support ratings continue to remain in dismal single digits. In the latest survey released Friday by local pollster Gallup Korea, Moon scored 41 percent, followed by Ahn with 30 percent and Hong with 9 percent.

During the meeting with the exporters, Hong also reiterated that he would become a market-friendly leader by swiftly undoing unnecessary business regulations and sternly dealing with militant labor unionists.