DAEJEON, April 21 (Yonhap) -- A man in his 50s died of poisoning after eating a dish made with bullfrogs that apparently mistakenly included toads at a restaurant in the central city of Daejeon last month, police said Friday.

The Daedeok Police Station in Daejeon, 164 kilometers south of Seoul, said the 57-year-old man ate the dish with two colleagues of his company around 8:30 p.m. on March 9 at the restaurant, run by one of their wives.

The police said the dish was made with five bullfrogs that the man had caught at a reservoir two days ago and kept at the restaurant.

Around 10:00 p.m. after he finished the dish, he started throwing up before being rushed to a nearby hospital as his vomiting became severe. He was pronounced dead early next morning.

His two acquaintances showed similar symptoms but were not in life-threatening condition.

A forensic analysis of the leftovers showed that the dish contained bufotenine, a constituent of toad poison found in the skin on the back of the animal. An excessive intake of the poison can be fatal.

The police believe he mistook toads for bullfrogs. Among the five bullfrogs were apparently some toads, they said, adding that the two animals are identical in appearance. 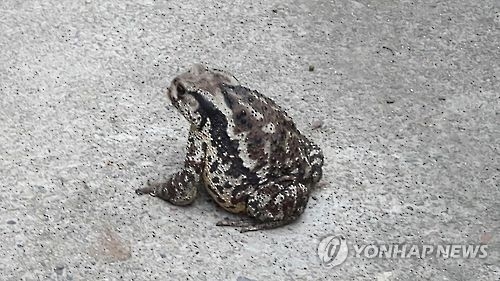