Koo, who plays with FC Augsburg in the German Bundesliga, tore a ligament in his right knee after landing awkwardly following an aerial battle for a loose ball against FC Cologne's Marco Hoger last Saturday. Medical examinations later showed it was a season-ending injury as the 28-year-old needs to be out for at least six weeks.

The former Wolfsburg and Mainz player will wrap up the 2016-17 season with three goals in 25 matches.

Koo will try to complete his rehab as quickly as possible to join the South Korean men's national team for a World Cup qualifying match against Qatar on June 13. He has been one of the regular members for Uli Stielike's side with 59 caps under his belt.

With only three matches remaining in the final Asian qualifying round for the 2018 World Cup, South Korea are currently second in Group A with 13 points from four wins, one draw and two losses, four behind leaders Iran and one above No. 3 Uzbekistan. Syria, Qatar and China are the other Group A contestants. 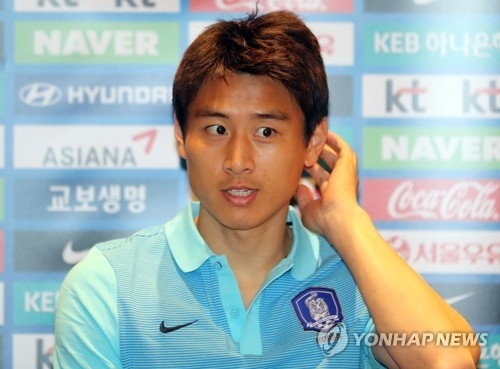