In a media interview, former Foreign Minister Song Min-soon reiterated that Seoul decided not to join the vote after consulting Pyongyang over the key foreign policy issue. Moon then served as the chief of staff to liberal President Roh Moo-hyun, who led the country from 2003-2008.

Song first made the revelation in his memoir published in October. He led the foreign ministry from 2006-2008.

Calling the renewed claim a "vile" attempt to sway voters jittery about the North's escalating military threats, Moon of the liberal Democratic Party countered that Seoul had contacted Pyongyang to "notify" it of the decision to abstain, not to hear its opinion on the issue.

"I just brushed it aside (when Song first made the claim) as he was a minister, whom I once worked with, and as there could be differences in our memories ... But it seems it is not a thing I can just shrug off when I see this happening ahead of the upcoming election," Moon told reporters. 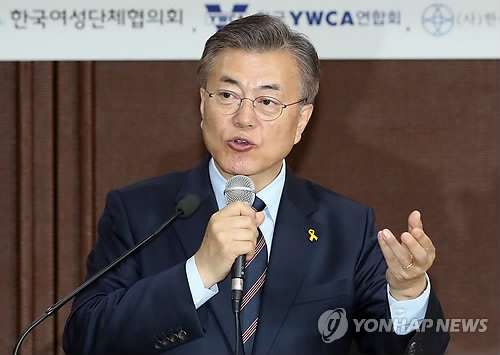 "We then notified the North of our decision to abstain. We never asked for its opinion nor did we have any reason to do so," he added.

Conservative presidential contenders wasted no time in condemning Moon, raising doubts over his leadership as a potential commander-in-chief at a time when the South Korean military remains on alert for possible North Korean provocations.

"Candidate Moon has told a lie ... a big lie if you look at Song's memoir," Hong Joon-pyo, the presidential candidate of the conservative Liberty Korea Party, said during a debate hosted by Kwanhun Club, an association of senior journalists.

"Can we bestow control of our armed forces to one who lies and does not call the North a main enemy? I am skeptical about this and convinced that Moon does not befit the presidential post," he added.

"(Song's claim) indicates that (Moon) continues to care about the North Korean regime and its feelings," Rep. Kim Young-woo said in a radio interview.

"The president is the top leader of the military, meaning if the president has the wrong understanding of the overall security situation, he or she can't make a crucial decision in case of a contingency," he added.

Earlier this week, Moon came under attack for his refusal to refer to the North as a "main enemy" during a televised debate among the top five presidential candidates.

Moon's campaign said that he refuses to publicly label the North a main enemy as the next president needs to seek dialogue with Pyongyang to establish peace on the peninsula and pursue peaceful reunification.

But his conservative opponents cited such a stance as proof that he is weak on security.

Despite a barrage of conservatives' attacks on him, Moon is seen maintaining a lead in the latest voter survey conducted by local pollster Gallup Korea.

Moon scored 41 percent, followed by Ahn Cheol-soo of the center-left People's Party with 30 percent and Hong with 9 percent.