Hwang made the remarks during a ceremony to mark the Day of Science on Friday, and the Day of Information and Communications on Saturday, respectively.

"(Our country) will strive to create new industries and services by securing future growth engines such as smart cars and the Internet of Things," Hwang said. 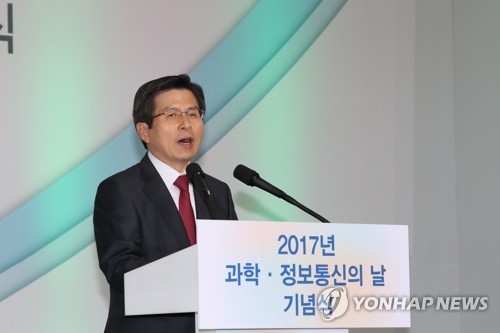 To better cope with the fourth industrial revolution marked by the convergence of cutting-edge technologies, Seoul has been pushing for nine "national strategic projects" which include technologies involving virtual reality, autonomous vehicles, smart cities, biotechnology and ultra-light materials.

Later in the day, Hwang invited venture firm heads to his official residence and called for their efforts to develop new technologies and contribute to creating jobs.

Hwang took over as acting president in December after former President Park Geun-hye was impeached by parliament over a corruption scandal. His interim leadership is set to end after the May 9 presidential election.