Returning to the game with a new five-member lineup amid rumors growing over L.Joe's legal issues with TOP Media, home of Teen Top, subsequently released a video that mainly focuses on the members performing the choreography of the single "Love Is."

"Love Is" leads off the 11-track album that marks the first full-length project since "No. 1" dropping in 2013.

While widely praised for its perfectly synchronized dance moves, Teen, instead of putting all its eggs in a single basket, absolutely gives viewers a snapshot of pure sonic power with the authentic Teen Top sound in the video,

"Think it's funny? You can't handle a relationship, girl. Grow up," the seven-year-old band, who used to serenade lines that catered to senior ladies with "No More Perfume on You," now rips through caustic bars, taking a jab at mean girls toying with men's hearts. 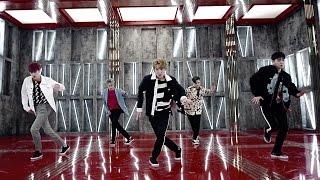