The nominee from the Bareun Party said there is no reason to hesitate to wage a pre-emptive strike if the North appears close to launching a nuclear attack. But he made clear he will oppose if U.S. President Donald Trump attempts at a preventive strike.

"We must distinguish between a preventive strike and a pre-emptive strike," Yoo, former chairman of the parliamentary defense committee, said during a debate hosted by the Korea Broadcasting Journalists Club.

"A pre-emptive strike is a preventive measure any country must take. If there are clear signs the North will attack us with nuclear missiles, what we must do first before we are attacked is a pre-emptive strike."

Trump aides' recent remarks that all options are on the table in dealing with Pyongyang sparked widespread talk here about its possible military steps without a clear distinction of the two kinds of action.

If Trump called for a preventive strike, he would firmly say no, he added.

"If the signs are clear and we still don't carry out a pre-emptive strike, (the president) would not be qualified to be the commander-in-chief," he added.

Meanwhile, Yoo refused to bow to pressure from some members of his party to drop out of the presidential race despite his single-digit approval rating.

"I was nominated through a democratic process," he said. "(Their demand) damages the basis of democracy." The presidential election is set for May 9. 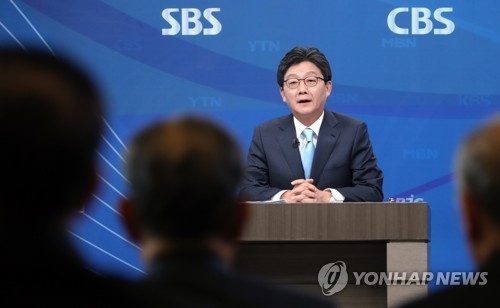