SEOUL, April 21 (Yonhap) -- SBS TV's comedy program "People Looking for a Laugh" issued an apology Friday over a skit that many people found offensive and racist.

In the segment "Real Gag" aired on Wednesday, comedian Hong Hyun-hee colored her face black and dressed up in what appeared to be African tribal dress with a cheetah-print top and a skirt made of cabbage. The skit made crude jokes about her appearance and gave the impression of disparaging people of color.

Soon after the segment went on air, it invited angry comments about how insensitive and racist it was.

The backlash got traction online in Korea when Australian TV personality Sam Hammington, who works in the country, wrote on his Facebook page yesterday that the performance was ridiculous and very disappointing.

In an official statement, the production team apologized by saying, "We sincerely apologize for failing to review the content more closely and making viewers uncomfortable." It vowed not to let a similar incident happen again.

The controversial segment was deleted from the company's Web site. 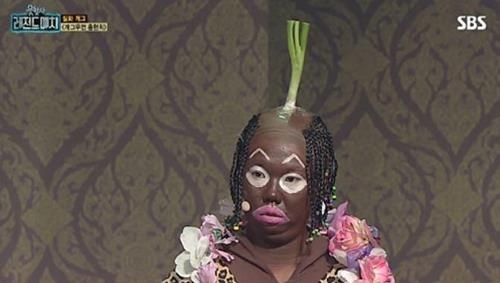