WASHINGTON, April 21 (Yonhap) -- U.S. President Donald Trump said Friday China can solve the problem of North Korea if it wants to because the country provides the "economic lifeline" to the impoverished communist neighbor.

"China is very much the economic lifeline to North Korea so, while nothing is easy, if they want to solve the North Korean problem, they will," Trump said in a Twitter message.

It was the latest in a series of remarks that Trump has made in recent weeks to prod China to exercise its influence as the main food and energy provider for the North to stop the regime from additional provocations.

During a joint news conference with Italian Prime Minister Paolo Gentiloni on Thursday, he praised Chinese President Xi Jinping for working hard to increase pressure on Pyongyang, citing Beijing's decision to return coal imports from North Korea as an example.

Trump also held out the prospect of a better trade deal if China helps solve the problem.

"One of the reasons that we're talking about trade deals, we're talking about all of the different things. We're slowing up a little bit. I actually told him, I said, 'You will make a much better deal on trade if you get rid of this menace or do something about the menace of North Korea' because that's what it is. It's a menace. So we'll see what happens," Trump said.

Beijing has often increased pressure on the North in the past, especially when Pyongyang defied international appeals and carried out nuclear and missile tests and other provocative acts, but it never went as far as to cause real pain to the North.

Trump held his first summit talks with Xi earlier this month with a focus on North Korea. He has since praised China for trying to increase pressure on Pyongyang. Trump has also decided against labeling Beijing a currency manipulator, saying it could jeopardize efforts to solve the North Korea problem. 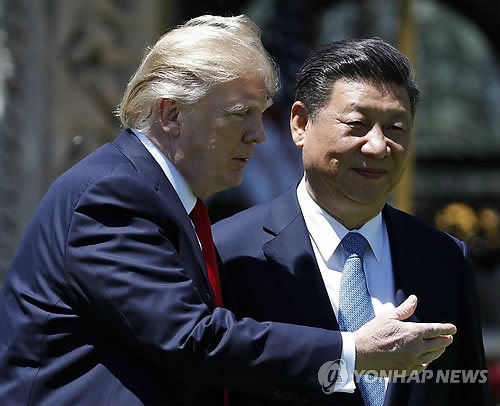