WASHINGTON, April 21 (Yonhap) -- U.S. President Donald Trump was referring to "some things that were helpful" in resolving the problem of North Korea when he said a day earlier that "very unusual moves" have been made with regard to the issue, his spokesman said Friday.

"The president, obviously, is privy to a lot of information. He's not going to share everything he knows, but there's some things that he saw that were helpful with respect to that subject," Spicer said during an off-camera press gaggle.

Asked to be more specific, Spicer said, "I cannot. I'm not privy. No." 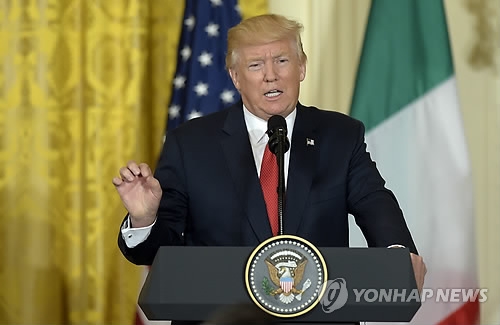 Trump made the remark during a joint news conference with Italian Prime Minister Paolo Gentiloni at the White House, praising Chinese President Xi Jinping for trying hard to rein in the North.

"Many coal ships have been sent back. Many other things have happened. Some very unusual moves have been made over the last two or three hours. I really have confidence the president will try very hard," Trump said without elaborating.

Trump appeared to be referring to unidentified fresh measures that China has just taken to pressure Pyongyang after returning coal shipments from the North, though the remark may also mean a possible contingency inside North Korea.

Considering Trump spoke just hours after the U.N. Security Council adopted a press statement condemning North Korea's latest missile launch, he might have referred to Chinese support for the measure, though it is not unusual at all for Beijing to back such a statement.

It was the fifth statement the council has adopted on North Korea this year, all with Chinese support.

Earlier Friday, Trump pressed China again to exercise its leverage over the North, saying in a Twitter message, "China is very much the economic lifeline to North Korea so, while nothing is easy, if they want to solve the North Korean problem, they will."

Spicer said that China has taken action to pressure the North.

"I think we've seen a lot of positive action from China, both at the U.N., some of the public statements they've made on -- the President noted yesterday with respect to some -- the energy sector," he said. "We've seen some very positive signs with China to help put the appropriate pressure on North Korea."

Spicer also said, however, that unless China solves the problem, the U.S. will.