SEOUL, April 22 (Yonhap) -- North Korea has said it is closely monitoring moves by the United States and fully prepared to counter any "provocations."

The North's foreign ministry said in a statement, released by the Korean Central News Agency on Saturday, that Pyongyang will never be intimidated by the recent U.S. actions, including the dispatch of a nuclear aircraft carrier strike group to waters off the Korean Peninsula. 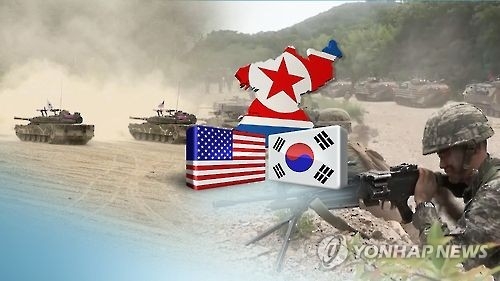 "Recently, the authorities of the Trump administration are spouting a load of rubbish calling for browbeating the DPRK by force of arms every day. They are crying out for settling the issue with the help of someone, seeking to bring nuclear aircraft carrier strike groups one after another to the waters off the Korean Peninsula," said the statement dated Friday. DPRK is the acronym of North Korea's official name.

"Such intimidation and blackmail can never frighten the DPRK. ... The invincible revolutionary Paektusan army, closely following the maneuvers of the U.S., is waiting for an order only after rounding off its full preparedness to counter them immediately," said the statement written in English.

The ministry said the North is determined to "go to the end," stressing its "access to a powerful nuclear deterrent to protect itself from the U.S. nuclear threat."

It then vowed to take "Korean-style tough counteractions" to cope with any U.S. provocations.

North Korea "neither fears a war nor wants to avoid it," the ministry said.

The latest statement came amid growing tensions on the Korean Peninsula over North Korea's nuclear and missile programs. There is speculation that it may carry out its sixth nuclear test or launch an intercontinental ballistic missile.