At a press conference in the National Assembly, Moon, candidate for the Democratic Party, said he and his government "will take back the wartime OPCON early" and enhance deterrence against North Korea's nuclear and missile threats.

"We will take charge of our defense ourselves by all intents and purposes," Moon said.

Moon pledged that South Korea will play a bigger role in efforts to denuclearize the North and push for denuclearization based on simultaneous actions by stakeholders instead of demanding the North first show its resolve to give up atomic weapons.

The front-runner candidate said he will carry out former President Kim Dae-jung's "Sunshine Policy" to engage with the North to ultimately persuade Pyongyang to change. 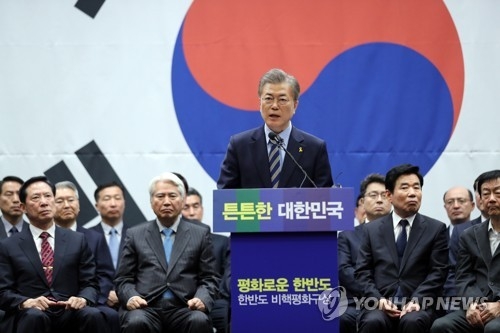 On Friday, former Foreign Minister Song Min-soon disclosed a document to back up his claim that Seoul officials consulted North Korea before a key U.N. vote in 2007. It added fuel to a political fire that has engulfed presidential front-runner Moon Jae-in, who was then a chief presidential aide.