An official with the Korea Baseball Organization (KBO) said MLB made the suggestion during a visit to Seoul last fall, but nothing has been decided on that front.

"We haven't had any concrete discussion since then," the official added. "It's something we're still reviewing."

Earlier in the day, CPBL Stories, a website with stories on the Chinese Professional Baseball League in Chinese Taipei, said Jim Small, vice president of MLB Asia, was in the country last week to discuss the MLB All-Star tour in November this year.

It then said the MLB All-Star team will make a stop in South Korea before heading to Chinese Taipei.

MLB sent an All-Star squad to Chinese Taipei in 2011, and also had an exhibition series against the Nippon Professional Baseball (NPB) All-Star team in 2014. South Korea has never hosted an MLB All-Star team, though the St. Louis Cardinals played here in 1958. 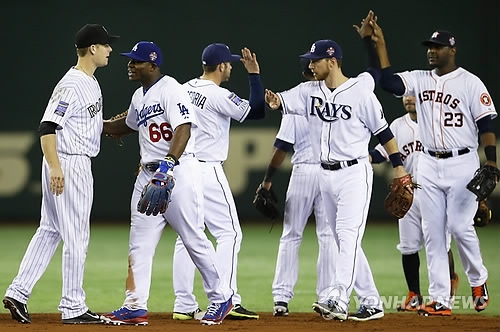 "If this game materializes, we could field an All-Star team of our own, like Japan did, or it could be one specific club against the MLB All-Star team," the official added. "But nothing is set in stone as far as MLB's visit."

Gocheok Sky Dome in Seoul, the only domed baseball stadium in the country, could be the venue. It hosted the first round action of the World Baseball Classic last month.

The KBO, NPB and CPBL will all have a busy offseason. In January, the three leagues agreed to organize a new offseason tournament called the Asia Professional Baseball Challenge from Nov. 16 to 19 at Tokyo Dome. The competition will be limited to players under 24 or to those with under three years of professional experience.