ILSAN, South Korea, April 27 (Yonhap) -- More than 600 small and medium-sized companies in South Korea have clinched deals with partners based abroad over the past year through a trade convention for overseas Korean entrepreneurs and smaller firms, expanding their foothold outside the country, its organizing body said Thursday.

The World Federation for Overseas Korean Traders Association (World-OKTA) said a total of 661 small and medium-sized companies (SMEs) signed a total of 1,227 trade deals with some 374 World-OKTA members, consisting of Korean entrepreneurs living overseas, through an "export matching" service provided by the association since April last year.

The news was announced by the World-OKTA during the trade convention jointly hosted by the association and Yonhap News Agency, South Korea's key news wire service, in Ilsan, northwest of Seoul, earlier in the day.

The 19th session of the World-OKTA trade convention is being held for a three-day run through Friday, seeking to boost local exports and nurture business ties between local SMEs and Korean businessmen based overseas. 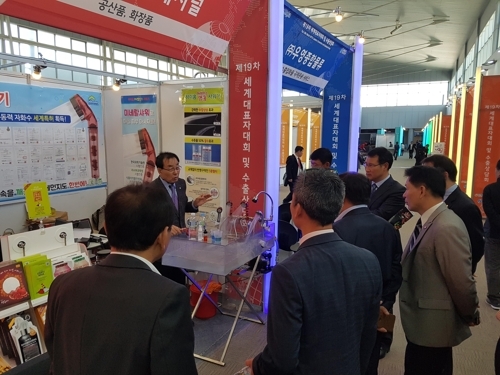 Some 510 members from 145 countries around the world are attending this year's convention, the organizing body said.

"Many of our members from Asia and the North American region have participated in the matching program, with the deals related to beauty products hitting the highest figure of 229 cases on the back of the popularity of K-beauty," Jin Hyuk, head of the World-OKTA's Global Business Center said at the conference.

The event on its second day included a showcase of its export matching program, in which a representative from World-OKTA introduces a variety of lineups produced by some 40 local SMEs, which mainly included seasoning pastes, household items and machinery parts.

"The showcase is significant as it reflects our strategy of 'glocalization' in which we set out to tap the global market with products that are mostly Korean," Park Ki-chool, the acting president of World-OKTA said.

In 2016, World-OKTA provided over 1,280 SMEs with assistance in their overseas expansion, helping them clinch deals worth a total of some US$3.23 million, according to the organization. Set up in 1981, it currently has more than 25,000 members worldwide. 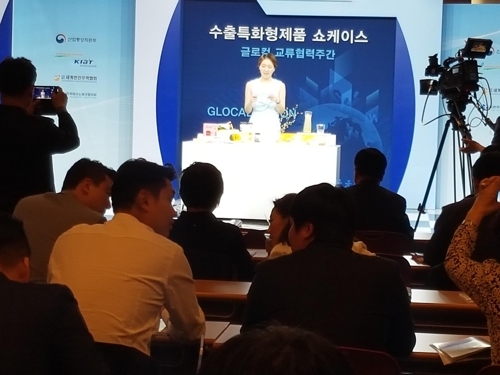