SEOUL, April 27 (Yonhap) -- Daewoo Shipbuilding & Marine Engineering Co., a troubled shipbuilder here, said Thursday that it swung to the black in the first quarter of the year from a year earlier, largely thanks to cost-cutting measures.

Net profit reached 261 billion won (US$230 million) in the January-March period, compared to a loss of 3.4 billion won in the same quarter of last year, it said in a regulatory filing.

Late last month, creditors, led by Korea Development Bank (KDB), announced a fresh rescue package worth 6.7 trillion won for Daewoo Shipbuilding. Next month it is set to receive a fresh cash injection of 2.9 trillion won from the creditors, the second of its kind.

With the new funds, the shipbuilder will be hard pressed to implement self-rescue measures worth 5.3 trillion won through 2018. It has already sold off noncore assets and cut its workforce, through which it has raised or saved 1.8 trillion won.

For the rest of the year, the shipyard aims to cut costs for workers by 25 percent to 640 billion won. Moreover, it is planning to cut its workforce to below 9,000 by 2018, and will try to sell more assets.

Meanwhile, the company is struggling to win more deals.

So far, the shipyard has secured $770 million worth of orders and aims to clinch as much as $5.5 billion in orders for the whole year. 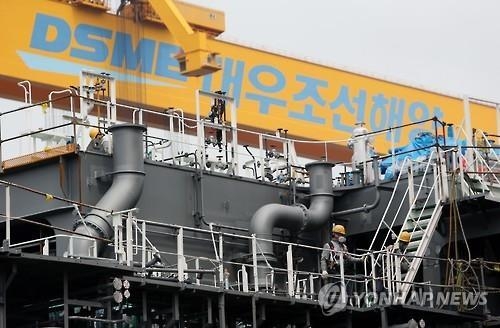