SEOUL, June 1 (Yonhap) -- Moving into a town full of complete strangers may be hard and stressful to most people. When Kwon Ji-hyun, a 36-year-old working mom, decided to bear it and relocate to an unheard-of village in west Seoul four years ago, there was only one thing on her mind: a daycare center where her child can be in good hands.

"I was at a loss for what to do when my mother said she had to move out of town. She was of great help in taking care of my son," she said, asking for an alias to be used.

She couldn't find anyone to help her care for the baby who was just four years old at the time. All child care centers were booked up and she was so desperate.

While searching the Internet for days, Kwon stumbled upon a child care center with one opening located in a village called Sungmisan. As soon as she heard that her baby was accepted, she didn't hesitate at all to move.

The child care center might seem to be no different from others but it is the country's first "shared" child care facility where parents are actively engaging in caring for and educating their kids, not to mention its management. 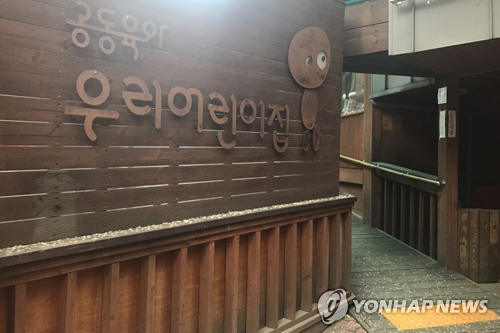 In 1994, a few young couples pooled their money and launched this child care center here in a bid to help each other in caring for babies and actively getting involved in ensuring transparency and getting more access to food, education and so on.

In pursuit of alternative child care and more involvement in raising their kids, more young couples moved in, naturally turning the neighborhood into what is now commonly known as Sungmisan Village.

Building on the initial child care infrastructure, Sungmisan residents -- estimated at around 1,000 in 2015 -- are now jointly running around 70 community activities ranging from a school, cafe, small theater, and food cooperative to small stores tailored to meet their own needs.

Through such joint activities, many meet quite often to have drinks over their kids and daily life which brings them closer to the level of first-name friends. An annual festival, group learning classes, and info and news bulletin boards are also making their friendship and community more closely knit. 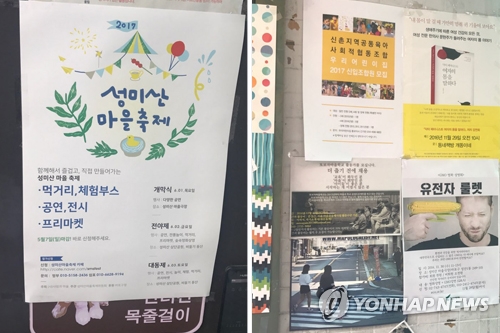 "Joining in activities at the child care center, I have made many friends, though most of them are older than me. We talk about kids, how to raise and educate them and sometimes share our views on our daily life and jobs," Kwon said.

"We have gotten close enough to leave our children with those living next door in times of emergency, which you cannot begin to expect while living in a big city like Seoul," she added.

Sungmisan Village, named after a small mountain in the region and located in Mapo-gu, west Seoul, has emerged as a rare but vibrant urban community steadily growing and getting attention from people fed up with typical life in a large city like Seoul.

Seoul, home to around 10 million people, has turned into a megacity teeming with high-rise apartments and buildings over the past few decades.

Long gone in the process are the close-knit communities and friendly neighbors, and even casual greetings with those living just next door have become few and far between.

Sungmisan has been attracting people especially nostalgic about the "good old days" where many things were shared among neighbors, including food and worries about their daily life, jobs and family issues.

Such nostalgia and longing to return to those days was stirred recently by a popular cable TV drama "Reply 1988," which featured the daily life of friendly neighbors in a cohesive village in the 1980s.

Still, child care and education are the top reasons for many opting to settle in Sungmisan Village.

Kong Byung-gak in his late 40s was one who came to the village for education. He sent his two children to an alternative school launched in the early 2000s here, which focuses less on textbooks and rote learning and more on hands-on and ecological experiences.

"It was like an escape from education that makes our kids unhappy. I couldn't have my kids get education solely focused on college entrances," Kong said.

He now leads a de facto community operation council where major decisions in the village are discussed and made. He recently opened a beer shop that serves as a meeting place for the council and other neighbors.

"This is a place where people get together and chit-chat. Sometimes, a party is held on the spur of the moment. This is fun and we like this small happiness," he said. "You can experience what was featured in such dramas as 'Reply 1988.'" 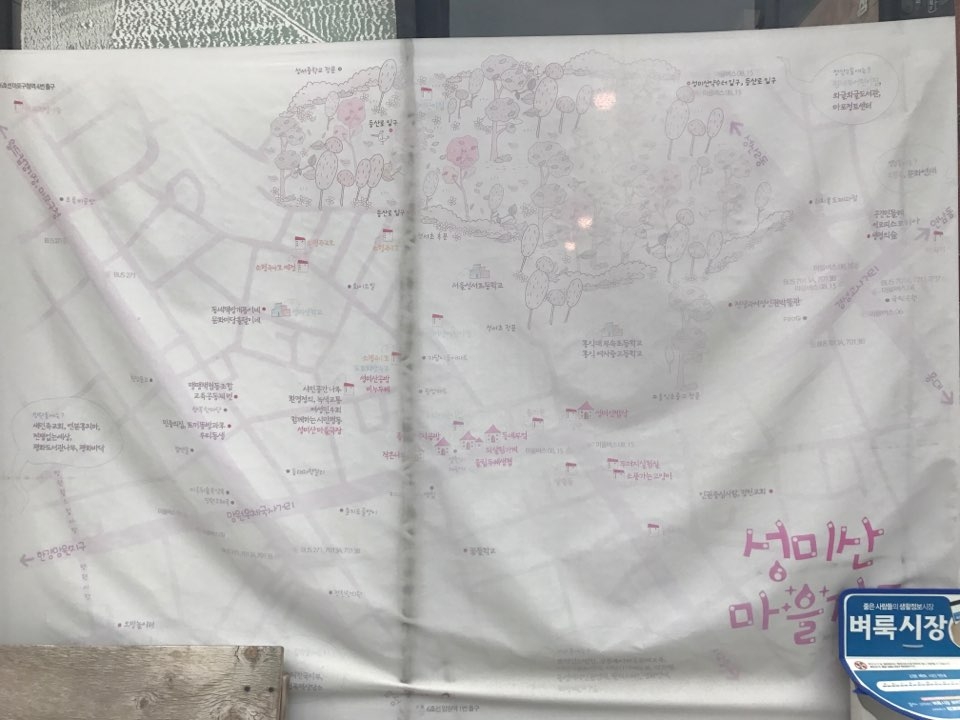 There was a crisis that put the fate of the village in jeopardy.

When the Seoul government pushed to build a new water distribution system in the Sungmisan region in the early 2000s, its residents staged a strong protest and campaign against it. The movement went on for about two years and the city project was withdrawn.

The worst, however, could be yet to come. One of the potential threats is the steadily rising rent of buildings and houses in the region partly buoyed by brisk development and hot spots springing up in neighboring regions such as Mangwon, Hongdae and Seogyo.

"Ironically, as we are getting more attention, the rent is rising due to hot spots springing up in nearby regions. This is forcing some of our landmark stores out of the market," Kong said.

"People say that we can buy happiness with money, but that belief, I think, is destroying human relationships and making them unhappy. I think that enjoying happiness through relationships with people, albeit small, is genuine happiness," he noted.