WASHINGTON, May 31 (Yonhap) -- U.S. President Donald Trump said Wednesday that North Korea is one of the topics he would discuss in summit talks with Vietnamese Prime Minister Nguyen Xuan Phuc.

"It's an honor to have the prime minister of Vietnam at the White House, in the Oval Office. Prime Minister Phuc has done a spectacular job in Vietnam, led so many different categories in trade and other things," Trump said at the start of the meeting with Phuc.

Trump did not elaborate, but he was believed to mean that he would try to enlist Vietnam's support for pressuring Pyongyang to curb its nuclear and missile programs.

The talks came just a few days after the North carried out its ninth missile test this year.

The Trump administration has been stepping up efforts to rally international support for driving up pressure on the North.

In late April, Secretary of State Rex Tillerson hosted a special ministerial session of the U.N. Security Council and urged U.N. members to suspend or downgrade diplomatic relations with the North and cut off trade ties supporting Pyongyang's illicit activities. 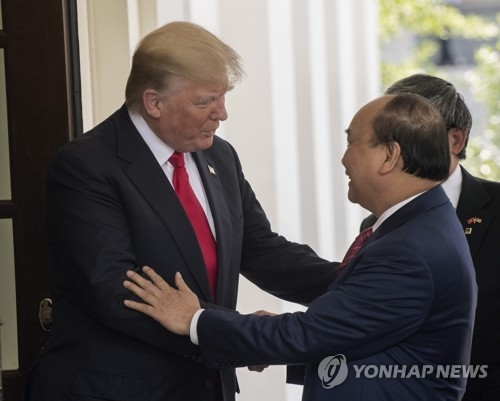