The country's consumer price index gained 2 percent last month from a year earlier, slightly up from the previous month's 1.9 percent rise, according to the data compiled by Statistics Korea.

Consumer prices have been hovering around 2 percent since the first month of 2017 due to a sharp gain in oil prices, following a 1.3 percent on-year gain in December last year.

From a month earlier, the index edged up 0.1 percent in May. 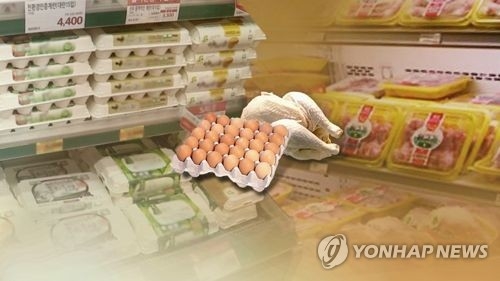 Prices of livestock products rose 11.6 percent on-year in May, with those of egg surging 67.9 percent in the aftermath of an outbreak of avian influenza. Pork prices also jumped 12.2 percent on-year on rising demand in the spring season.

Moreover, a steady hike in petroleum prices pushed up consumer prices last month as prices of gasoline at the pump rose 7 percent last month and those of diesel vaulted 10.3 percent.

"Crude oil prices has been on a rise for nearly a year, although the upside pace has been slowing down to some extent," said Woo Young-jae, director of the price statistics division at the statistical bureau. "This month, livestock prices and private service charges also played a role in fueling inflation."

On the other hand, prices of vegetables fell 8.4 percent in May from a year earlier on an increased supply, while utility bills retreated 1.6 percent on an electricity price-cut program by the government.

"The upside trend of 2 percent inflation will likely continue further if there are no sudden ups and downs," the statistics office said.

(LEAD) S. Korea's consumer prices up 2 pct in May

(LEAD) S. Korea's consumer prices up 2 pct in May