It would serve as a chance for the minister, Han Min-koo, to focus on a round of "defense diplomacy" on the North Korean issue, taking a break from a massive political controversy over the handling of the U.S. deployment of its advanced missile defense system, called THAAD, here.

Han will "attend the 16th Asia Security Summit, also known as the Shangri-La Dialogue, as planned," the ministry said. It will take place from Friday to Sunday.

Launched in 2002, the annual event draws defense ministers, military chiefs and other representatives from 27 member states, including China. North Korea is not a member.

On the sidelines of the session, Han is expected to hold a series of bilateral and multilateral meetings with some of his counterparts, such as U.S. Defense Secretary Jim Mattis and Japan's Tomomi Inada.

In talks with Mattis, North Korea's growing missile and nuclear threats will be high on the agenda.

It's almost certain that the THAAD issue will be raised as well, as it comes ahead of summit talks between South Korea's new President Moon Jae-in and his American counterpart Donald Trump slated for late this month. 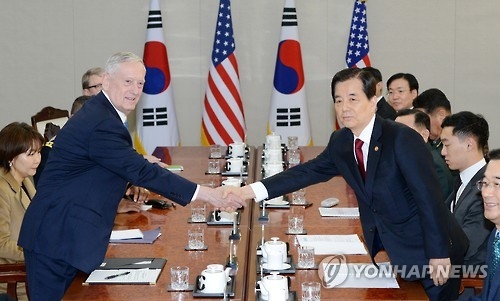 The U.S. Forces Korea has positioned two THAAD rocket launchers and a cutting-edge X-band radar at the designated site in Seongju, some 300 kilometers southeast of Seoul, under a bilateral deal signed in 2016.

Four more launchers remain stored at a nearby U.S. military base to be installed there.

Han has come under fire amid allegations that he has sought to conceal the dispatch of the four extra launchers to the country.

The presidential office said the defense ministry "intentionally" dropped a related explanation from a report to Moon on pending defense issues.

The THAAD equipment apparently arrived here before Moon took office on May 9 in a process that the Pentagon says was transparent.

But Moon has stated that THAAD was brought into the country without public consent and due procedures. He wants to review Seoul's decision on THAAD or renegotiate it with the Trump administration.