SEOUL, June 1 (Yonhap) -- A potential U.S. interest rate hike in June is likely to have an insignificant impact on the South Korean stock market as it is widely expected, analysts said Thursday.

The Federal Reserve is slated to hold its monetary policy meeting on June 14-15 amid widespread expectations the U.S. central bank will jack up its benchmark lending rate for the second time this year. The Fed raised rates in March on economic optimism.

"As a recent survey shows, all watchers expect a rate increase in June, it would not have much impact on the South Korean bourse," said Hankook Investment & Securities analyst Kim Dae-jun. "If a rate hike is uncertain, it could come as a problem."

According to a recent survey by Bloomberg, the probability of a U.S. rate increase in June, which is reflected in the federal funds futures rate, is 100 percent. 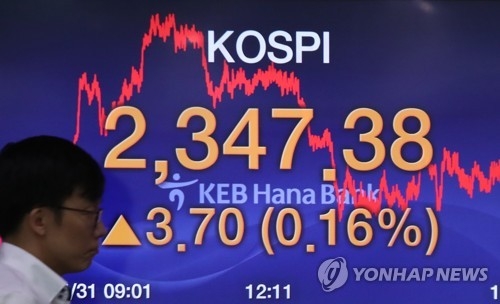 Kim Sung-hwan, an analyst at Bookook Securities Co. echoed the view. "U.S. rate hikes, which have been progressing gradually based on good economic and financial market conditions, are unlikely to crimp global risk appetite."

Some watchers said investors should focus on whether the Fed will decide to cut its assets rather than hike the key interest rate.

"The Fed will discuss whether to scale back its asset holdings for the first time in 10 years, which could lead to a strong dollar," said Kim Yong-koo, a researcher at Hana Investment & Securities Co. "There is a need to size up the possibility of asset reduction through its beige book."

Currently, the U.S. central bank holds some US$4.4 trillion worth of Treasurys and mortgage-backed securities, which it has bought to inject liquidity into the market since the 2007-08 financial crisis.
(END)