(ATTN: UPDATES with quotes at bottom)

The seven-year-old K-pop team announced earlier that it will disband after releasing its final single album. Hyolyn and Soyou are expected to pursue solo careers, and Bora and Dasom, who have much experience appearing on TV shows, will turn to acting.

The team's disbandment came across as a shock to many as the members were seen as having good teamwork with their management agency while enjoying steady popularity.

Sistar won the moniker "summer queens" for its popular summer tracks "So Cool," "Loving U," "Give It to Me," "Touch My Body," "Shake It" and "I Like That." 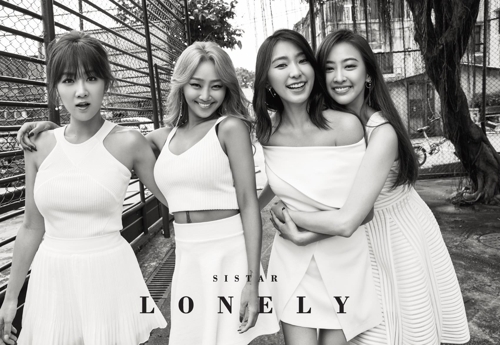 The member themselves said they were surprised by the song's strong performance.

"Frankly I didn't expect the song to reach number one. The song isn't a summer song per se," Bora said in an interview with Yonhap News Agency, adding that she's especially grateful for fans for such support.

Soyou agreed. "I'm thankful for all the love towards the song. I thought people would be disappointed since it's not a cheerful song."

When asked about the happiest moment in the group career, Dasom picked out when the team won first place in 2011 for "So Cool."

"I was so emotionally overwhelmed I cried a lot. I did think that it would be great to win first place. It was so exhilarating to be congratulated on stage with fellow artists," said Dasom.

She also hinted that the members could reunite.

"I can't guarantee but I do think that we can perhaps one day get together. We're not splitting because we fell apart from each other and by looking at other senior groups nowadays, it doesn't look like an impossible situation," Dasom said.