During a press meeting, Chung expressed deep regrets over the government and ruling Democratic Party having pressed ahead with the confirmation process for Lee Nak-yon, which the LKP has called unfit, citing a string of allegations surrounding his family.

Last month, Moon proposed the idea of creating a policy consultative body among his new government, and the ruling and opposition parties as part of efforts to build cooperative ties with an opposition-led National Assembly.

"We have no intention of participating in the formation of the body that the president and government will lead to unilaterally explain their positions on state affairs," the LKP floor leader said. 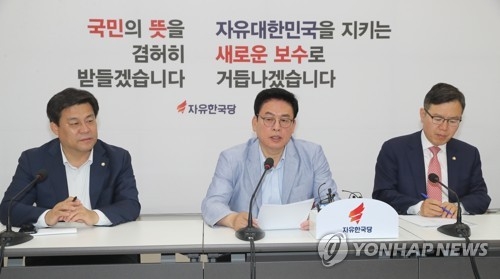 "We believe that it is meaningless to form the consultative body that the president suggested in his pursuit of cooperative governance," he added.

Chung, instead, suggested the formation of a dialogue mechanism led by the political parties, not by the president.

Mending fences with conservative opposition parties is a major task for the nascent liberal government. The ruling party holds only 120 seats, quite short of a majority in the 299-member parliament.

"It is our responsibility as the main opposition party to put (the nominees) under the microscope," Chung said.

Chung, in addition, made it clear that his party is against Moon's push for a 10 trillion-won (US$8.9 billion) extra budget to create new jobs in the public sector. He said should the budget be set aside, it has to be used to revitalize the economy.