SEOUL, June 1 (Yonhap) -- A U.S. senator has said his country has proceeded with the deployment of a missile defense system in South Korea transparently amid a heated dispute here over its domestic procedures, which has prompted a presidential office probe into top security officials this week.

"There is no secret about how this has moved forward and there was television coverage on the delivery of the THAAD missile system. So it isn't that we were sneaking in to put this in place," he said in an interview with a small group of reporters right after his meeting with Moon.

"I don't think there has been any effort by the U.S. in any way to mislead the Koreans about what we are proposing."

The meeting came one day after Moon, who took office on May 10, ordered a probe into an "undisclosed" delivery of four additional THAAD launchers.

Two launchers are already in operation at the THAAD base in Seongju, North Gyeongsang Province, some 300 kilometers southeast of Seoul.

The presidential office said the defense ministry had intentionally omitted the presence of additional launchers in a recent briefing to the presidential security office. Presidential officials suspect that the "covert" process might be aimed at evading assessment on their environmental impact. 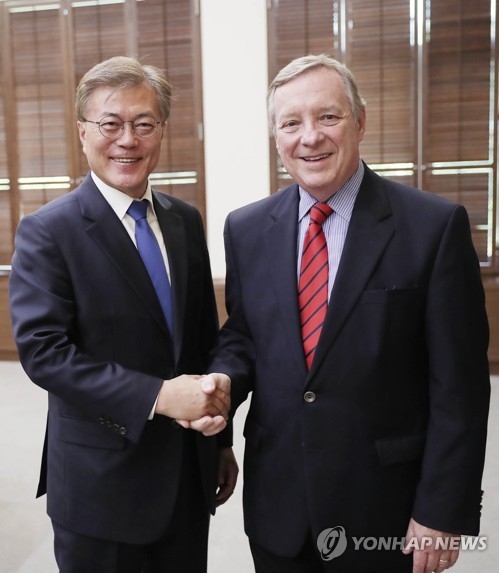 During the meeting Moon told Durbin that the probe into the THAAD issue was not intended to reverse the deployment agreement between Seoul and Washington but to conduct it with appropriate domestic procedures, according to the presidential office.

The senator said that the president expressed concerns about "whether or not the new missile defense system complies with all the environmental laws" of South Korea during their meeting.

"I assured him that my conversations with our military leaders made it clear that they don't want to cut any corners or ask for any special treatment when it comes to environment standards. I don't believe that would be an issue," the senator said.

Since South Korea and the U.S. jointly announced their decision to deploy a THAAD battery in July last year, controversy has been growing over its efficiency, possible fallout on Seoul's relation with China, environmental and health impacts, and alleged murky processes of decision making and implementation.

President Donald Trump has added fuel to the controversy when he earlier raised the issue of "cost-sharing" on the installment and operation of THAAD.

Durbin said that negotiations for the THAAD missile defense system had been going on for about two years and that there is no secret about the process, dismissing suspicions that Washington has been pushing for its installation hastily or secretly.

He emphasized the missile shield is aimed at protecting the country against growing threats from North Korea and wondered why the main feature does not dominate the debate here.

"I basically said to him two things. We face tough budget times in Washington. We are cutting a lot of programs. And if Korea doesn't want, South Korea does not want the THAAD missile system, it is US$923 million that we can spend some other place," he said during the interview held in central Seoul right after his meeting with Moon.

"Secondly, I believe that if I lived in South Korea, I would want as many missile defense systems as possible to protect against the hundreds of ballistic missiles which North Korea could rain on the South should war begin. I don't understand why that feeling does not dominate this conversation. I think national security and defense should dominate," he added.

The presidential office, meanwhile, denied later that there were such comments by Durbin on the money possibly being used in some other place if Seoul doesn't want the THAAD system.

"During the meeting between President Moon and the senator, there were no such comments as far as I know," a Cheong Wa Dae official told reporters.

As for some Koreans' argument that the THAAD system is aimed at "primarily" protecting U.S. forces stationed in South Korea, Durbin expressed displeasure.

"I am very troubled by that argument and I said several times (during the meeting) that protecting U.S. forces in Korea is important to me. It should be important to people of South Korea. These U.S. forces -- 28,500 -- are rising their lives for the safety of South Korea and they should be protected as should all of the people in Korea," he said.

On North Korea, Durbin said that sanctions and pressure are the most effective way to discourage Pyongyang from seeking nuclear and missile programs.

"I think that requires making it clear to Kim Jong-un that there is a price to pay for his aggressive development of missiles and nuclear weapons," he added.

He said that China is key to all of this and has the capacity to become a "game changer" in the current stalemate, though he expressed disappointment with China not making sufficient efforts.

"I think that China is key to this... believe China has the capacity to be a game changer in this situation... (But) as of yet, I haven't seen any indication that China is taking a more aggressive approach."