SEOUL, June 1 (Yonhap) -- The ruling Democratic Party said Thursday it would push for a parliamentary hearing on a controversy over the defense ministry's alleged failure to report to the president the delivery of additional U.S. missile interceptor launchers.

On Tuesday, President Moon Jae-in expressed his frustration and ordered a probe into why the delivery of four additional THAAD launchers was not disclosed.

The presidential office said that the defense ministry had intentionally omitted the delivery of additional launchers in a recent briefing to the presidential security office -- a charge denied by Defense Minister Han Min-koo.

Amid the escalating controversy, Moon said that the probe into the THAAD issue was not intended to reverse the deployment agreement between Seoul and Washington but to conduct it with appropriate domestic procedures.

The Moon administration has sought to gain "democratic and procedural legitimacy" of the THAAD deployment, claiming that the former government had failed to take due steps, such as building public consensus over the security policy decision. 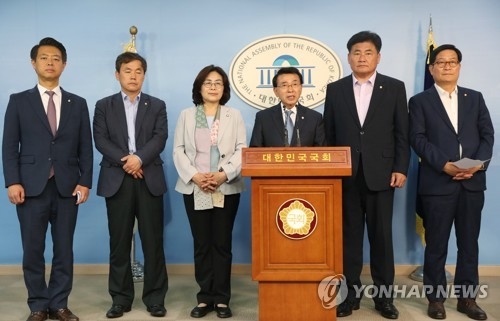 Ruling party to push for parliamentary hearing on THAAD controversy

Ruling party to push for parliamentary hearing on THAAD controversy