Seongnam said they previously requested that the K League fofeit the second leg of the promotion playoffs on Nov. 20, 2016, due to Gangwon FC's use of an ineligible player. But since the league didn't take any action, they decided to take the case to court on May 23.

"We formally filed an appeal, but the league showed an irresponsible attitude, which made us file the suit," Seongnam said. "Because of the league's lukewarm response, we're in a situation where there are no perpetrators, but only victims exist."

Seongnam, which finished 11th in the top-flight K League Classic in 2016, had to face then-second tier club Gangwon in the two-leg playoff series to remain in the first division for the 2017 season. However, Seongnam were relegated to the second division K League Challenge as they lost to Gangwon on the away goals rule.

Seongnam played to a scoreless draw in the first leg on the road before picking up a 1-1 stalemate at home in the second leg. The result dropped Seongnam to the Challenge for the first time in their club history, a real shocker for the seven-time first-division winners.

Seongnam claimed that then-Gangwon midfielder Sergio Paulo Nascimento Filho, better known as Serginho, was ineligible to play in the second leg because he was under investigation by South Korea legal authorities over using a fake passport.

Serginho had dual citizenship from Brazil and Syria when he joined Gangwon last June through the league's Asian player quota. However, it turned out his Syrian passport had been doctored and the 29-year-old footballer eventually had to be kicked out of South Korea.

According to the K League code, a club needs to file a complaint against an opponent's fielding of an ineligible player within 48 hours after their match. Seongnam said they had filed the complaint right after the second leg and also took proper steps for an appeal.

"Back then, Seongnam didn't file an appeal through official documents and they just asked us whether Sergingho could be considered ineligible," the K League official said. "We then replied back to Seongnam that Serginho was not confirmed as an ineligible player at that moment because the prosecutors hadn't concluded their investigation." 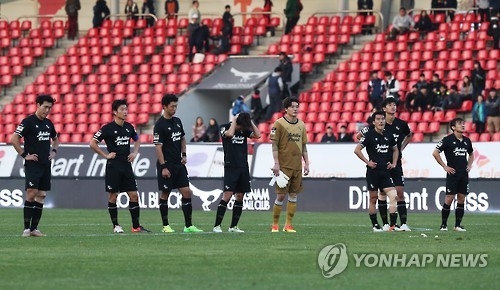