Chung Eui-yong, the National Security Office chief, will meet his U.S counterpart H.R. McMaster and other officials to discuss the agenda for the summit slated for later this month, and cooperation in reining in a provocative Pyongyang, the office said.

Observers said that during his stay in Washington, Chung and U.S. officials could also touch on a set of pending issues surrounding the deployment of a Terminal High Altitude Area Defense (THAAD) battery to the peninsula and the Korea-U.S. free trade agreement.

Chung's trip came against the backdrop of growing concerns that the THAAD issue could trigger friction in the bilateral alliance.

On Tuesday, Moon expressed his frustration and ordered a probe into why the delivery of four THAAD launchers -- in addition to the two launchers already deployed -- was not disclosed.

Amid the escalating controversy, Moon said that the probe into the THAAD issue was not intended to reverse the deployment agreement between Seoul and Washington but to conduct it through appropriate domestic procedures.

The Moon administration has sought to gain "democratic and procedural legitimacy" for the THAAD deployment, claiming that the former government had failed to take due steps, such as building public consensus over the security policy decision.

Pyongyang's unrelenting saber-rattling is also expected to be high on the agenda for Chung's talks with U.S. officials. Moon has said that he would take a two-pronged approach toward the recalcitrant regime that involves both sanctions and diplomatic engagement. 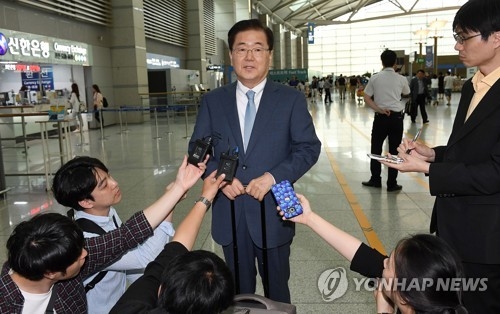